“My dog walks herself to the car every single time because she’s so excited and today she wouldn’t even drop her leash once she got in the car.” 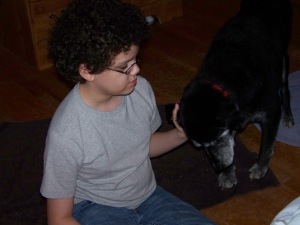 When we first brought home our dog, Sheena, in 1997, she was just a little bitty thing. We kept her in the kitchen overnight, using a baby fence to keep her in. Only fitting, as the family we’d adopted her from had called her “Baby.”

The following year, we brought home my son, Coleman, and what a culture shock it was for Sheena. First of all, she thought SHE was the baby. If her name had been “Baby” and she was a dog, then this new creature called a baby must be a dog, too! Was it taking her place?!?

Eventually, they became the best of buddies and she would often sleep next to my son’s bed. He used to kiss her head and pat her, and her tail would wag, up and down, side to side. His friends would come over and greet her like part of the gang. She was a shepherding dog at heart and happy to have a flock around her at all times.

As she got older, she got hit with one ailment after another; still, she kept going. But when she developed an aggressive cancer that made every breath a crash course in pain, we finally knew we had to let her go.

She was a furry, cold-nosed blessing for fourteen years, and I’m eternally grateful that my son and I had her in our lives. As long as we live, she’ll always be in our hearts.